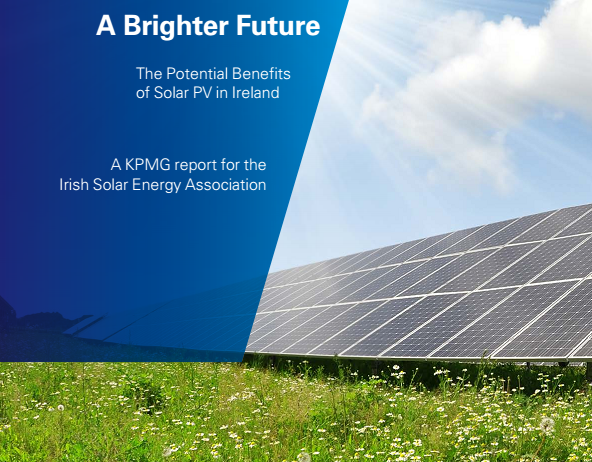 Solar technology deployment could support up to 7,300 jobs for economy

A new report from KPMG has found that deploying solar PV technology to power Irish homes and businesses could support up to 7,300 new jobs per year between 2017 and 2030. ‘A Brighter Future – The Potential Benefits of Solar Photovoltaics* (PV) in Ireland’ is published today, 24 November 2015, by KPMG in association with the Irish Solar Energy Association (ISEA).

The other key findings of the report are:

Commenting on the report, Mike Hayes, Partner and Head of Energy and Natural Resources at KPMG said: ‘There are a wide range of potential benefits to the Irish economy if a policy support scheme for Solar PV was introduced. We know that for every €1 of policy support, the solar industry in Ireland would deliver €3 of Gross Value Added to the economy over the 2017-2030 period.’

Ireland does not currently have a policy mechanism to support Solar PV akin to a Feed in Tariff or Contract for Difference. The Government is currently consulting on future support schemes for renewable technologies following the closure of the REFIT 2 and REFIT 3 schemes, and has indicated that the review could introduce support for a wider range of technologies, including Solar PV.

David Maguire, Chairman of the Irish Solar Energy Association, said: ‘The report outlines a variety of support mechanisms which the Government could use for both rooftop and large scale ground mount deployment – all of which would ensure value for money for Irish energy consumers and taxpayers. Furthermore, because Ireland is one of the last countries in Europe to support solar PV, we have a late mover advantage that gives us the opportunity to learn from the experience of other countries and deploy solar in a sustainable manner that delivers best value to the Irish citizen.’