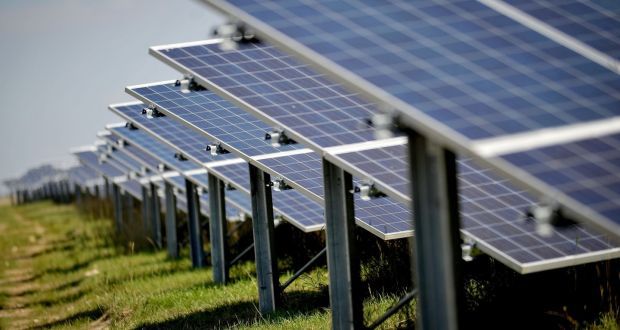 The decision by the European Union to lift restrictions on Chinese solar imports will increase the viability of green energy projects in Ireland, an industry group has said.

David Maguire, head of the Irish Solar Energy Association, a representative body, said that the move could bring down the cost of large-scale solar projects here by almost 10 per cent.

The EU announced last week that it was lifting taxes on solar panels imported from China.

The bloc introduced taxes in 2013 after accusing China of selling their solar panels at artificially low prices in order to shut down European competition.

It decided to reverse the decision last week, saying that it would help with the EU’s renewable energy targets. The move was welcomed by many in the renewable energy industry, who said that the extra supply and competition should help to make solar projects cheaper.

Mr Maguire said that the change could be particularly helpful in Ireland, where developers were struggling to get projects over the line.

He said the impact on end prices could be larger than it normally would be, as the US has recently introduced tariffs on Chinese solar panels, making it even more attractive to sell into the EU.

“While there is uncertainty over the scale of the impact I think it would be safe to say that there will probably be a reduction of between 7 per cent and 8 per cent, which is a big reduction in cost,” he said.

“It’s an important step in the direction [towards commercial viability] in Ireland.”

While many countries with relatively similar climates have large solar industries, there are no commercial-sized solar projects in Ireland.

Several years ago a slew of would-be developers applied for planning permission to build solar farms all over the country with the expectation that a government support system would make building commercially viable.

Such a system has yet to be introduced, leaving much of the land still undeveloped, but the government did recently publish a proposal of how it could fund renewable energy projects which Mr Maguire said would work for the solar industry.

He said that the further reduction in cost as a result of the EU decision would make subsidising solar energy cheaper for the state.

“It’s good news for Ireland and for the energy industry generally,” he said.

The Irish Solar Energy Association has previously highlighted the potential for Ireland if a viable solar energy industry were developed in the country.

A report carried out by KPMG, which was commissioned by the lobby group, found that more than 7,000 jobs could be created in the building and operating of solar farms in Ireland.

The association has estimated that state support would cost about €23 million a year. While the potential support needed by the sector has reduced as costs have come down, critics say that the industry should just wait until costs come down to a commercially viable level to build.

The industry has argued that building solar farms would help Ireland to work towards its binding EU 2020 renewable energy targets, of which it is currently due to fall short. By 2020, 16 per cent of Irish energy is due to be produced by renewable energy. For every percentage point the state undershoots, it is liable to be hit with fines of about €100 million.